Update - September 27 - 3:30 pm. Launch remains scheduled for this coming Sunday, September 29, with a 2-hour launch window that opens at 9 a.m. PDT. It's possible the launch could slip to Monday with the same launch window.

Other viewing locations that have been suggested:  Floradale Ave., Harris Grade Road and Coral Road. A map with the exact pad location is included at the end of this article.

Some of us launch chasers will meet at 7:30 a.m. on Sunday at Lompoc Donuts, 400 N H St in Lompoc before heading out to the viewing locations. Feel free to join.

The weather on both Sunday and Monday at Vandenberg looks good; clear, sunny days with 0% chance of rain and highs in the low- to mid-70s.

Icing on the cake: Here's the mission patch for Falcon 9R's maiden launch. 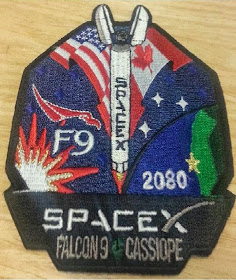 Image credit: SpaceX
Mission patch for SpaceX's maiden launch of its flagship next generation Falcon 9 rocket, the company's first launch from Vandenberg AFB.
Can you identify the meaning of all the elements?


Update - September 25, 2:30 pm. Info from SpaceX today confirms Sunday, September 29 launch date, with a 9-11 a.m. window. Specifically, SpaceX is saying that launch on Sunday is "likely", but cannot say exactly what time between 9 and 11. If Sunday's launch is scrubbed, another attempt can be made on Monday, September 30, 9-11 am. On both days, the launch window assumes "good weather".

Translation: This is the closest I've seen to a firm date being set for this launch since June, so I'm optimistic. At the same time, I'm making plans to be able to attend both a Sunday or Monday launch, keeping in mind that there may be a scrub on both days due to weather or other issues.

Update - September 23, 11:00 am. spaceflightnow.com and Vandenberg AFB's launch schedule both list Sunday, September 29 as the launch date for SpaceX's Falcon 9R currently on pad SLC-4E at Vandenberg Air Force Base. The launch window is 9-11 a.m. PDT.

I recommend Providence Landing Park just south of Vandenberg Village as a viewing location. It is public, has parking, is elevated and about 10 miles from the pad. I am currently working on scouting out viewing locations closer to the pad and will post them here as the launch date approaches.

I am also organizing an informal post-launch tweetup / social for space geeks going to the launch who also follow this blog or my twitter / FB accounts. Anyone who'd like to join us is welcome. I'm currently considering a picnic at Providence Landing Park and a post-launch get-together at a local restaurant or cafe, or both. Please use the comments section below to let me know if you would like to participate or email me, ctaake23 at gmail.com. For a restaurant get together, I will need an approximate head count to make reservations. Feel free to make suggestions, especially if you're familiar with the area around VAFB.

If this launch is successful, SpaceX is planning to use facilities at VAFB for 30 launches over the next 5 year and we will finally have Space Coast West. SpaceX launches from VAFB may very well become regular occurrences in SoCal!

If you are making travel plans, keep in mind that the launch date may slip again prior to next Sunday. This is a maiden launch that has been slipping since June. However, this time, the rocket is actually on the pad and has successfully completed its static fire test.
This is a good sign!

Scroll down for more info about this launch, the Cassiope satellite, pictures, videos and a map of the launch pad location. I've been updating this article for about a month now.


Update - September 20, 6:00 pm. SpaceX conducted its second hot fire test yesterday. It went off with all systems green for launch. The launch window opens on September 29/30. I will post updates here as soon as more info becomes available. In the meantime, here is a little preview video, showing yesterday's successful static fire.


I will continue to publish updates here and on twitter as the probable launch date of September 29/30 approaches. spacenews.com has an article on the reasons for the delay to late September: pad-interface anomalies and range conflicts.

Update - September 14, 2:00 pm. Thursday's hot fire revealed some issues that SpaceX is currently analyzing. Another hot fire is scheduled for today, Sept. 14, along with the Launch Readiness Review. Launch has been delayed from Sunday, September 15; all sources say "to be determined" at this time. I'm unsure if this means "a few days" or "maybe in a month or two". Usually, a launch happens within a week of a hot fire without issues. Since Falcon 9 v1.1 has a lot of new technology, it could go either way.


Update - September 12, 7:00 pm. Today's hot fire test was successful! NASAspaceflight.com has an excellent, detailed summary: Falcon 9R hot fire  Launch is still targeted for this Sunday, Sept. 15, with a 9-11 a.m. launch window. There is a public viewing area at Providence Landing Park just South of Vandenberg Village, ca. 10 miles from SLC-4E. If you know of any other elevated, public viewing locations that are close, please share! Launch Readiness Review and Range approval is still pending. Hopefully, everything will continue to go as smoothly as today's test fire.  I'm getting excited to see SpaceX history being made at Vandenberg this weekend! Here are a few pics: 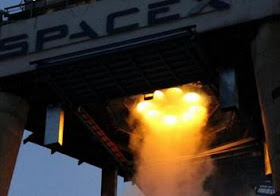 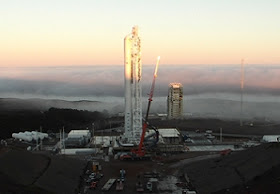 
Update - September 11, 6:00 pm. Pre-launch hot fire test scheduled for today has been delayed. No info yet on a launch delay. Launch on Sunday seems less likely. I will continue to post updates here.

Update - September 10, 5:30 pm. Launch date has slipped from Saturday, Sept. 14 to Sunday, Sept. 15, with a launch window of 9-11 am PDT. A pre-launch firing test was originally scheduled for Sept. 7/8; it is currently scheduled for tomorrow, Wednesday, Sept. 11. Providence Landing Park (see Sept. 4 update below) is a good public viewing spot.  The Falcon 9R launch vehicle is the latest version of SpaceX's flagship rocket and contains quite a bit of new technology. For starters, it is 60% longer than the rockets SpaceX has previous flown into space.

Click here for more details on the newest Falcon version. The upcoming launch is not only SpaceX's first launch of its largest rocket to date, it's also the private space company's first launch from its home state in CA. SpaceX has been building facilities at Vandenberg Airforce Base for some time (click here for more). The scheduled demo flight is SpaceX's first actual launch from VAFB. Below is a glimpse of the rocket in a tweet from SpaceX CEO Elon Musk. The fog swirling about is typical for the location in the summer. I like it ~

First of next gen Falcon 9 rockets rolls out to the launch pad at Vandenberg Air Force Base pic.twitter.com/hNl6zKodvr — Elon Musk (@elonmusk) September 10, 2013


Update - September 4, 1:30 pm. Thanks to Annie Wynn @acwynn for pointing out Providence Landing Park just South of Vandenberg Village as a publicly accessible viewing location. It is located on high ground with good views to the west. The park is a little over 10 miles from SLC-4E.

Update - September 4, 11:40 am. spaceflightnow.com has officially moved the launch date to Saturday, September 14. This confirms twitter buzz of a launch slip into mid-September. Soo... we may have a weekend launch. I've gotten an amazing level of interest in this launch via this blog post, enough to organize a #RogueTweetup (a meetup of space tweeps on launch day that is not organized by NASA). To stay updated, follow me on twitter (@ct_la), email me (ctaake23 at gmail.com) or leave a comment below. By now, it's pretty much a certainty that the beach viewing locations I describe below will be closed on launch day. If you have suggestions on viewing opportunities in the Lompoc area, please let me know. I will publish them here. It is my goal to find a public viewing location no further than 10 miles from the pad. In the meantime, Elon Musk chimed in on twitter.  Nothing like a good look at the rocket to give me launch butterflies ~

Was at Vandenberg today going over the upcoming next gen F9 rocket launch. Some tense days ahead pic.twitter.com/bfXnFt7alm — Elon Musk (@elonmusk) September 4, 2013

Update - September 2, 2 pm. I've had feedback that the launch may slip from the 10th into mid-September.


Update - August 29, 7:40 pm. I've had feedback that the beach locations could be closed for the launch. That is possible; they have been open in the past during launches from other pads. Even without beach access the pad location is still a good one for off-base viewing. I will continue to collect info ahead of the launch and post updates. Space X's next launch is scheduled for Tuesday, September 10. Veteran launch chasers may have noticed that there is very little information circulating ahead of this launch. Upon the request of its client, SpaceX has, in fact, decided not to allow media access for this launch at VAFB. This also means no official socials or tweetups for us social media space geeks. Publicity around this launch has been sparse. I have collated here everything I know about the launch to date, including a prime public viewing site 3-4 miles from the launch pad! Rogue tweetup, anyone? I was actually not aware until a few days ago that Dragon was scheduled to lift off from Southern California and not Kennedy Space Center in Florida. The original September launch date was set for the 5th. As of today, both spaceflightnow.com and VAFB's launch schedule have moved the date to the 10th, with 9-11 a.m. PDT for the launch window. VAFB is listing both the date and time followed by a question mark.


Where to view the launch:
If you can travel to Lompoc / VAFB on launch day, I have found a prime viewing spot. There are several challenges inherent in seeing a launch from Vandenberg. Mountainous terrain along the South of VAFB obscures views from the South. Low clouds and fog are common in the area, especially in the summer. The base is huge, extending along the coast around 12 miles. Launch pads are located throughout the base. If you don't know exactly where the launch pad is located, it's tough to find a good public viewing space ahead of time.  Finding the location of the launch pad, Space Launch Complex 4E, was tricky. It was used from 1963-2005 to launch Atlas and Titan rockets, and has been redeveloped since 2011 for use by SpaceX. Current base maps I found did not show SLC-4E as an active launch pad. Don't ask me what it took to find and verify SLC-4E's coordinates, but when I did, I got a nice surprise: It couldn't be in a better location for prime public viewing! Surf Beach and Ocean Beach Park, while located on VAFB, are publicly accessible with parking. Both are only about 3-4 (!) miles north of SLC-4E. From the beach locations, SLC-4E is not obscured by the mountain terrain at the South. The view should be extraordinary - however, do keep in mind the possibility of fog or low clouds. Still, if we can get that close to the launch, the very thrill of hearing and *feeling* it is worth the trip!

Be prepared for limited to no cell reception and wi-fi. VAFB is a huge cell phone "dead zone" in my experience. I will do my best to live tweet the launch. I am heading to the beach location early in the morning on September 10 from West LA, with an arrival time in Lompoc before 9 a.m., driving back that afternoon. I still have room for one or two people in the car. Leave a comment or email me if you are interested.